The flooding in Yellowstone has recently brought a lot of attention to the area. We did receive a lot of rain here in Eastern Idaho last week, but we were lucky to avoid the dangerous conditions you have seen in the news.

This winter brought some snow, but not enough. The snowpack was low, and the reservoir levels were even lower. Luckily, spring brought cooler temperatures and wet weather. Just over the continental divide, Montana got so much rain they are way above average, which has led to a lot of runoff and dangerous river conditions.

Eastern Idaho hasn’t experienced any of the extreme flooding conditions you have seen on the news.

To be honest, there is nothing really abnormal, and the heavy rain/late runoff should lead to better natural flows and lower stream temps during the heat of summer. In the long run, all this water is good!

All the high flows caused by last week’s heavy rain will subside pretty quickly, so flows and fishing will get back to normal pretty fast. Streams coming off the Centennial Mountains have receded and IP Res is already starting to drop, so they should start cutting flows soon. 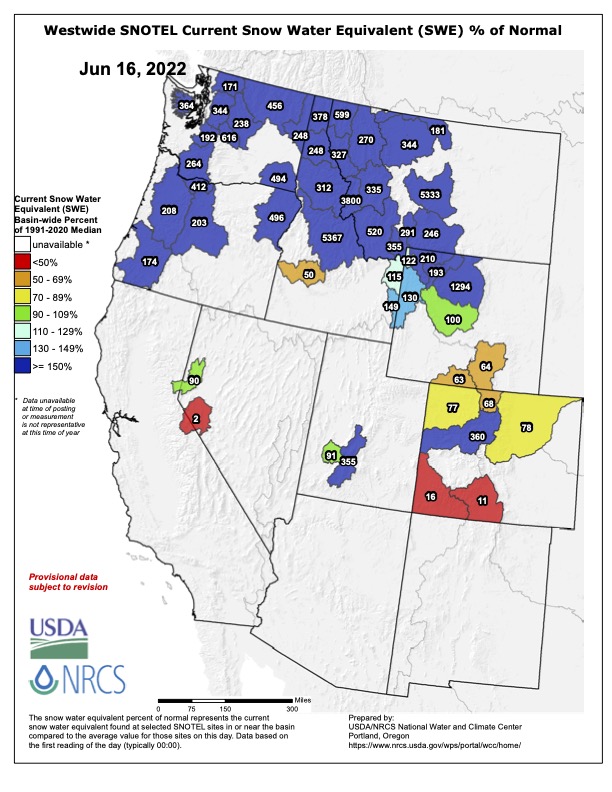 Streamflows increased on Henry’s Fork at St. Anthony on June 13 and 14. The increased flows are the runoff from the Southwest corner of Yellowstone Park from rivers such as Bechler & Fall River. The Henry’s Fork just below Island Park Reservoir has increased to around 1200cfs as of yesterday, but they dropped flows by 100cfs as of today. It is above the median, but as we approach July, the river should stabilize to normal summer flows.

The river flow on the South Fork of the Snake River got reduced since June 12 to increase Palisades Reservoir levels. The rainy weather we saw last week brought the levels approaching normal.

The real question is, How is the fishing?

What happened is that it slowed things down by around two weeks. Due to fluctuating flows, Henry’s Fork in Island Park is a bit slower. Fishing is better when flows are steady. The middle section of the Henry’s Fork (just above Warm River to Ashton) has been fishing pretty well but is off-color. We’ve used a mix of nymphs, streamers, and dry flies (in that order). The Henry’s Fork below Ashton is also getting better, but feeling the pressure from Montana anglers.

The South Fork of the Snake is fishing pretty well. Our first overnight camp trip on the canyon section was this week. We have been most successful going sub-surface.

The Teton River also experienced a swell from June 10 until yesterday, but the warmer temperatures will probably increase the flows. The important thing to note is that runoff is just late on the Teton & the South Fork of the Snake River, nothing to worry about. There is plenty of snow up in the Teton Mountain Range, so flows are regulated naturally as snow melts. If we had to make a prediction, we would guess that the fishing will get good around the Fourth of July weekend. You could fish the Teton now, but don’t expect much. Focus on the South Fork of the Snake River or the Henry’s Fork.

Don’t forget our lakes and reservoirs either. Give Henry’s Lake or Island Park Reservoir a try.

Please call one of our Idaho Fly Shops for an up-to-date fishing report and for what fly patterns to use.